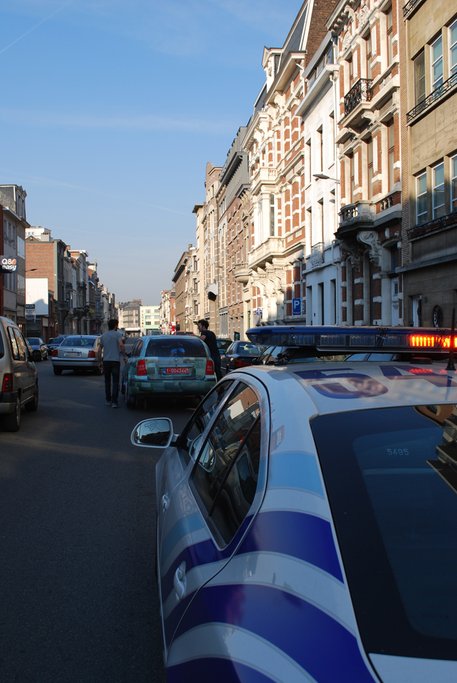 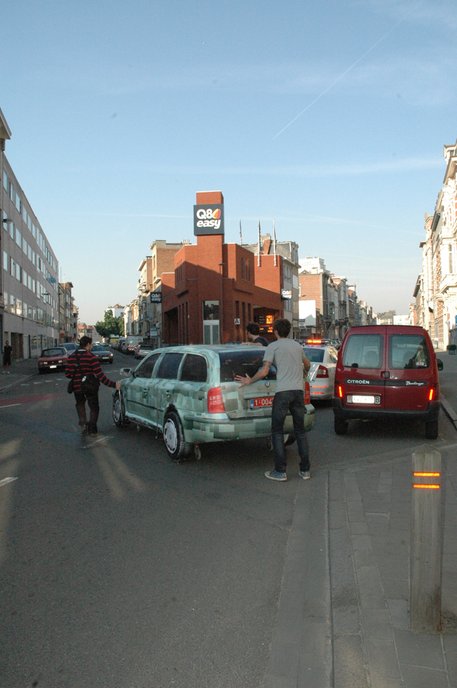 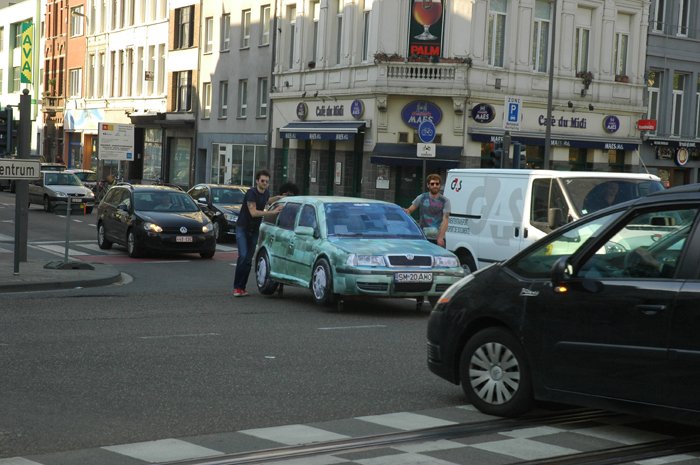 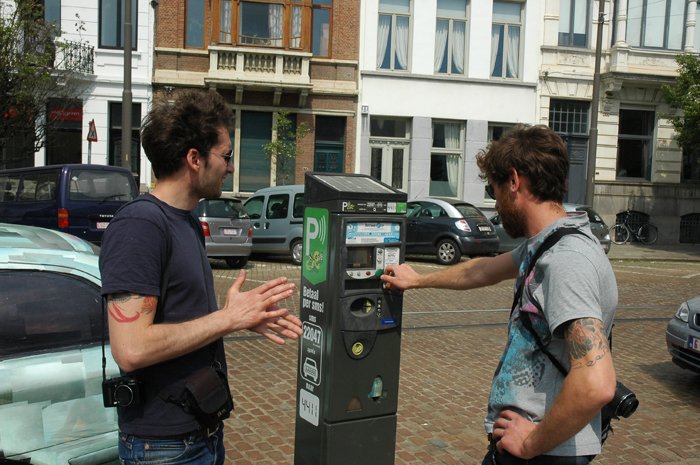 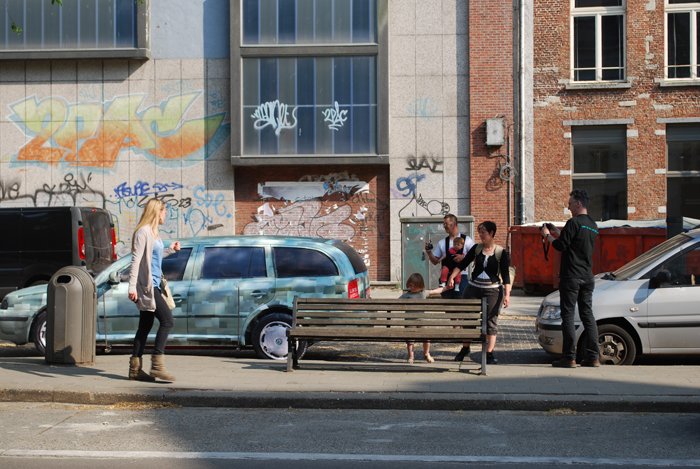 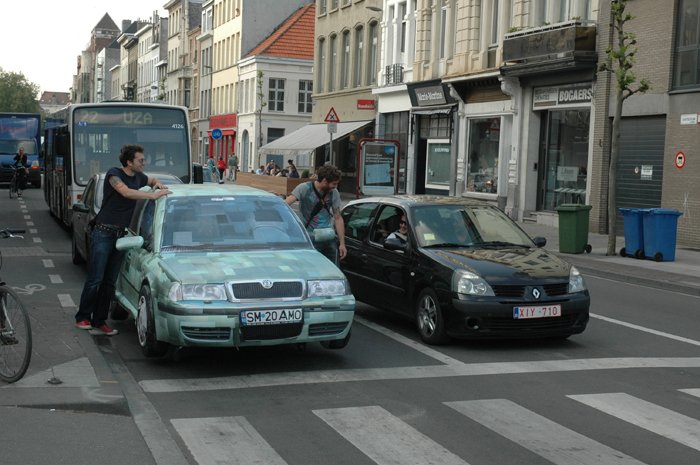 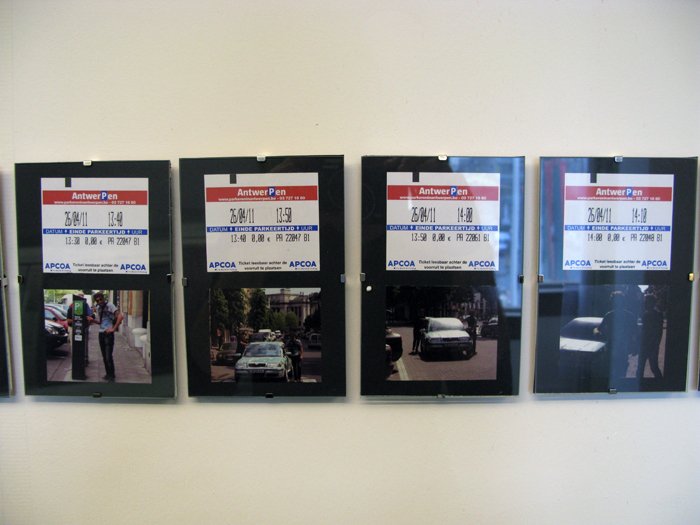 Cristian Bors and Marius Ritiu were born and raised in Romania. In February 2010 they arrive to Antwerp and become acquainted with the artistic environment in Belgium. Their adventure starts with a 'Skoda Octavia' car with which they drive to Belgium. Reason enough to honor this car in a new art project: 'Stressing State'. On the very first day that they start working on this project, things get awfully wrong. Whilst driving to a shop to purchase material for their project, their car is impounded by the police. They drive a car with Romanian registration plates, whereas they are registered as Belgian residents. Despite their Belgian residency, they are still waiting for their Belgian ID card. As long as they don't have this ID card, they are unable to register and insure the car in Belgium. Sometimes the police hand out a fine for this offence and grant some time to bring the paperwork in order, but in this case the police show no mercy. It takes them approximately three months to recover their car. Several official instances contradict each other and send them from one department to another. They show no preparedness to help. Bors and Ritiu experience the hard way that Belgium is a monkey country as far as regulations and administration is concerned.

Life is not easy for Bors and Ritiu. However, they don't remain idle. Riddled with humour and self-relativity they realize an art work based on their experience as an immigrant. They point at difficulties as a foreigner and draw attention on the absurdity of certain of our regulations. Rebel and naughty as they are, they constantly explore the limits of legality. Now that they have to do without their car, they re-construct it with polystyrene and do the finishing with papier-mâché made of colour prints of pictures of their car. The imitation car is a jewel! Seen from a distance, it is hard to distinguish it from a real one. Closer by, the illusion disappears. They park the car in Antwerp city centre and buy the required parking ticket. In Antwerp you are allowed 10 minutes parking with a free ticket. When the 10 minutes have elapsed, they move the car to another spot and take a new ticket. From a legal perspective everything is OK. 'Stressing State" has the underlying aim to annoy the state (authorities). On the other hand, this also refers to the situation of the artist himself. It is not easy and requires hard working to 'stress the State'. Having to move your car every 10 minutes in a single day is not (?) a joke! It is a waste of time for the sole purpose of annoying. It is pay-back time for Bors and Ritiu.

Bors and Ritiu like absurd and meaningless performances with an underlying social message. They criticize social and political issues and communicate with the people in the street. Art means more to them than a strong image or sculpture. They want to involve a wide audience in their actions and are curious for its reaction. They are technically astute. They are masters in copying objects which they use in their 'street art'. They document their actions on the street and show afterwards the object and the documentation in an art space. That's why they attach such a great importance to the elaboration of their sculpture and the way of documenting it. That is the only thing remaining, but it also needs to be sustainable in an art space. The imitation car certainly lacks no esthetic qualities. The context and the narrative of their work is also very important. The narrative is not only an integral aspect of their work, but has an added value. In this case, the police even gave the story a stronger edge by impounding their (real) car. Luckily, the police don't intervene during the performance with their imitation car. The good weather also was helpful since rain would have damaged the sculpture. The artists managed to park their car without problem and to move it on four small wheels. Passers-by are amused and amazed about the likeliness. Some even touch the sculpture to make sure it is indeed a fake one or offer jumping cables to get it started. The car is the object of hilarity in the streets. The enthusiasm is contagious.