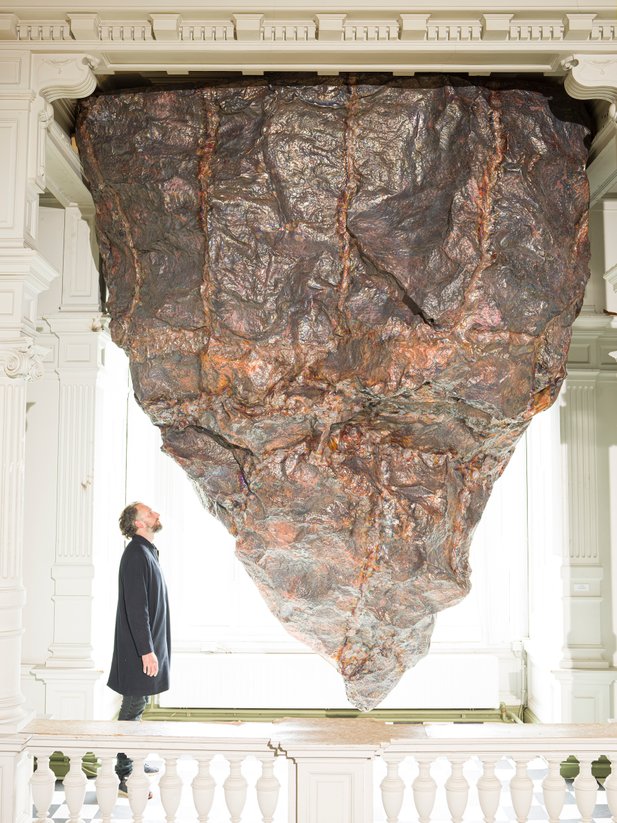 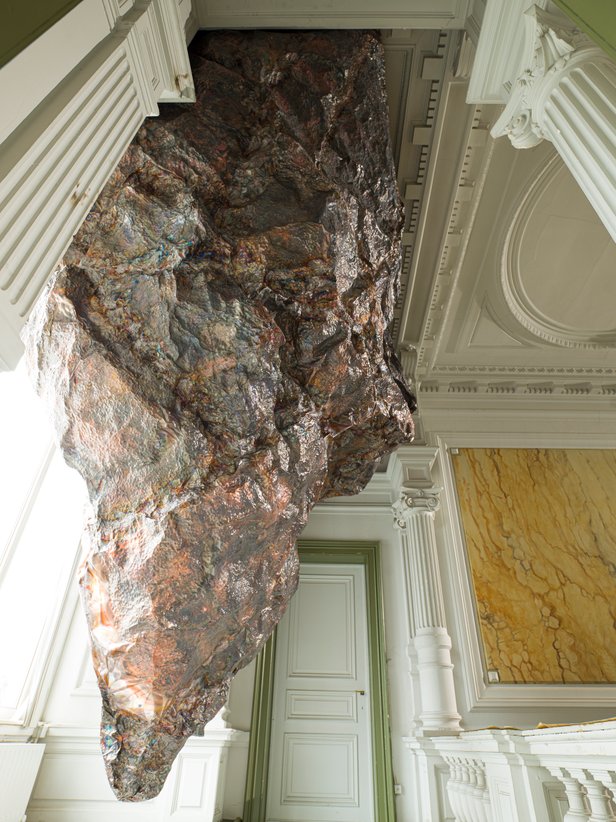 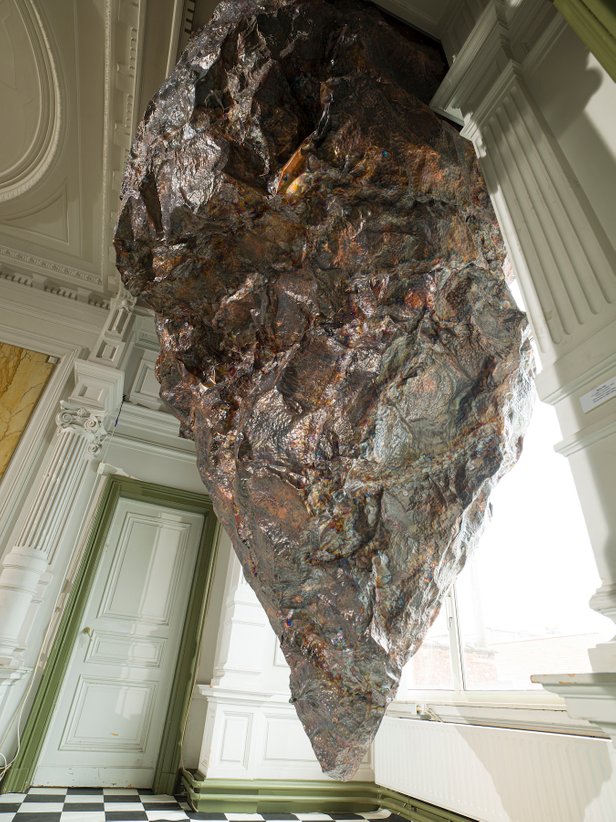 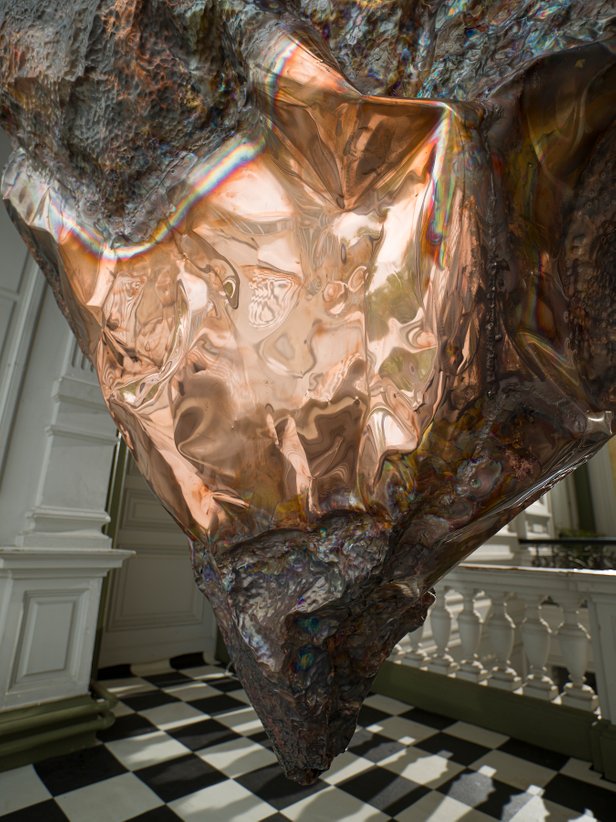 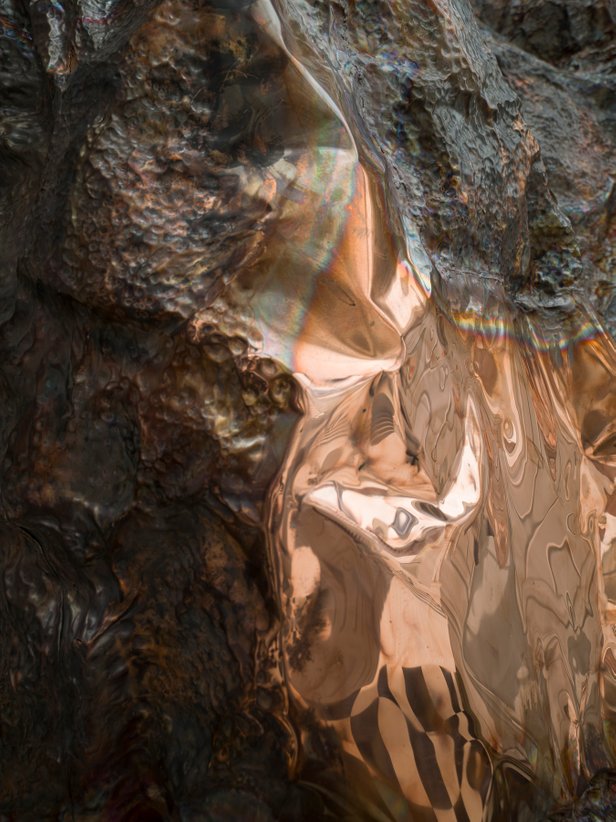 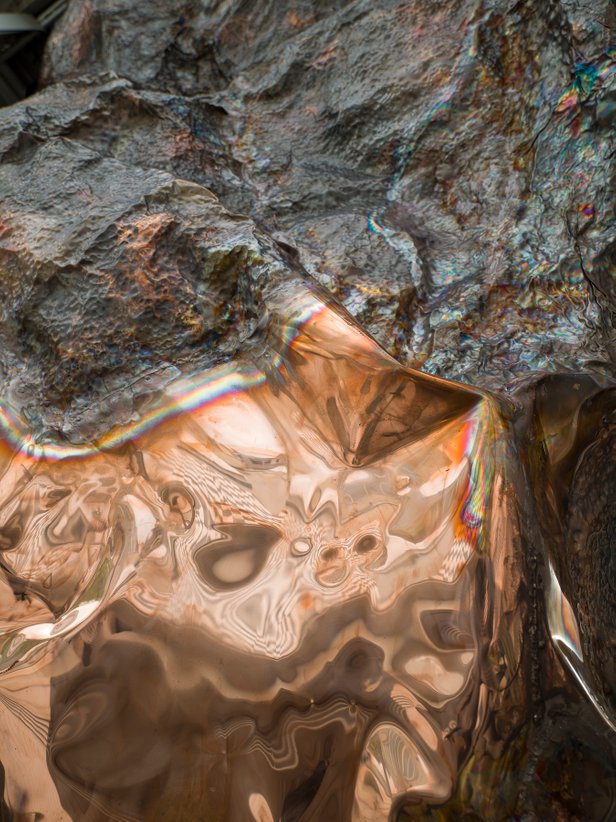 I Am a Glitch in the System (Sisyphus Part V)

From the wild nature of Transylvania and concrete jungle of New York, to picturesque landscapes of Andalusia and the port city of Antwerp, wherever the nomadic life brings Marius Ritiu he stumbles across an impressive rock that becomes the starting point of his creation. The subsequent process of transmutation of the rock into a copper sculpture is a cumbersome task. Yet, Ritiu’s projects are far from being a mere representation of the sculptor’s laborious endeavour. Interwoven into his semi-absurd stories, where real and fictional, myth and curious autobiographical incidents coexist, they operate as constellations of meaning.

“I Am a Glitch in the System” is a monumental mountain peak in copper and the summit of the artist’s ongoing series of projects titled Sisyphus. Inverted and squeezed inside an indoor space, it has a stupefying effect. Dealing with the familiar and the unexpected, and very physical yet surreal, it does not belong in the space, but nevertheless manifests its presence while making the visitor feel humble. “The struggle itself towards the heights is enough to fill a man’s heart. One must imagine Sisyphus happy”, argued Albert Camus in his interpretation of the myth. Accordingly, one might imagine the artist happy with the absurd act of mounting the giant copper rock in the space for a temporary
display. And yet, Ritiu’s sculpture offers more than a spectacular sensation caused by the immediacy of the encounter and exaggeration of the form. It is the artist’s sculptural technique that makes the project particularly ambiguous and captivating. The rock becomes an impetus, a motif, a model, and with tangible reflexivity, the material – copper – is also mined from rocks. Such peculiar repetition manifests the idea behind the project: the natural element is literally indispensable for the artist’s practice, and so is it for humanity at large. Thoroughly hammered in copper, the endless elaborateness of the stony pattern with its splits and cavities testifies to both the creative and destructive power of natural forces as well as their inherent unpredictability. What is instructive about the giant copper rock is connected to this. In the times of rapid and ubiquitous digitalisation, such turn to the geological fragment that presumably carries traces from prehuman history is not reactionary, but rather futuristic, although in an eschatological way. “I Am a Glitch in the System (Sisyphus Part V)” is meant to remind us that while in the human-created world of programming, a glitch may cause a minor misfunction, uncontrollable natural forces are capable of complete destruction of the anthropocentric system of beliefs.