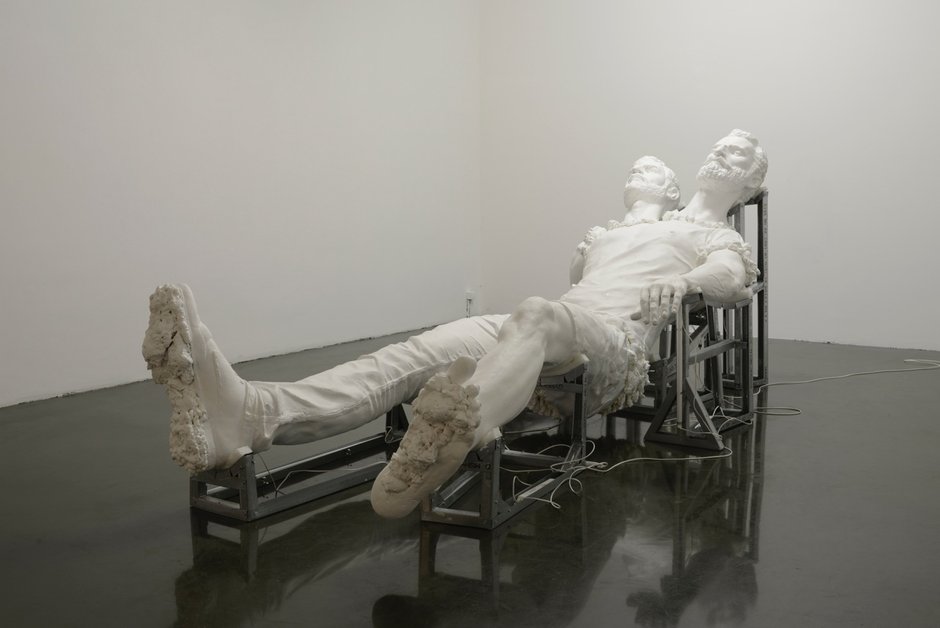 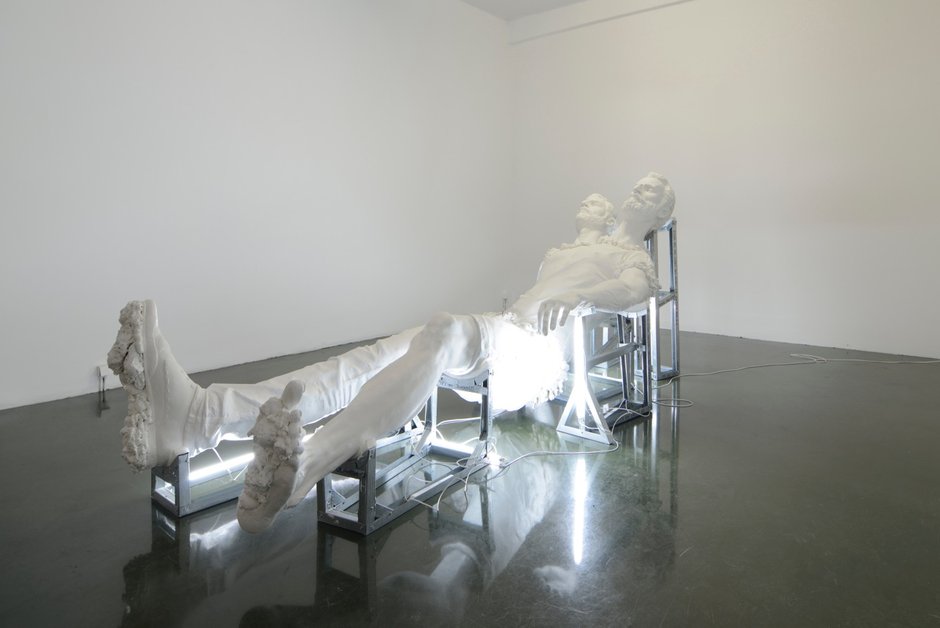 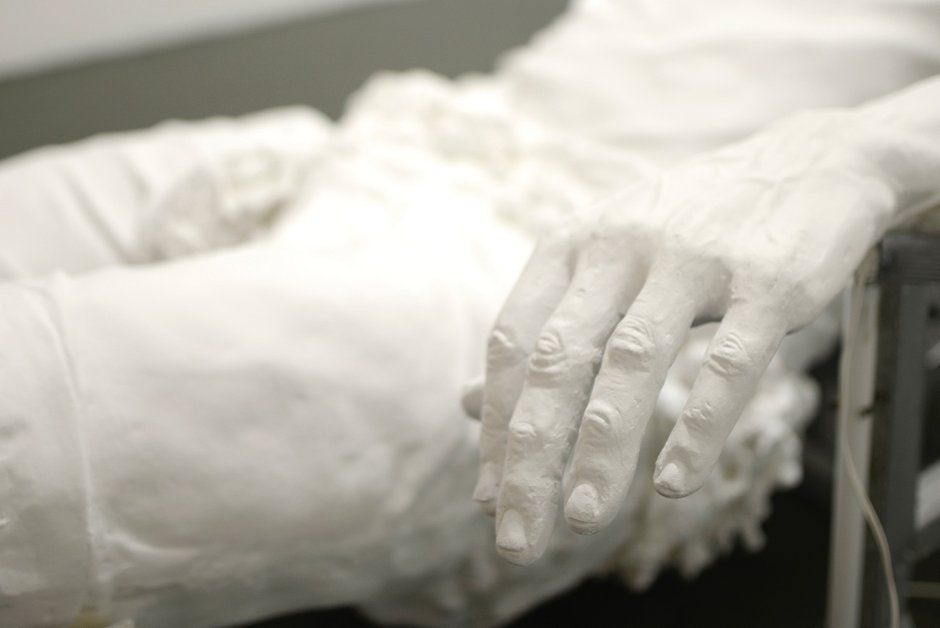 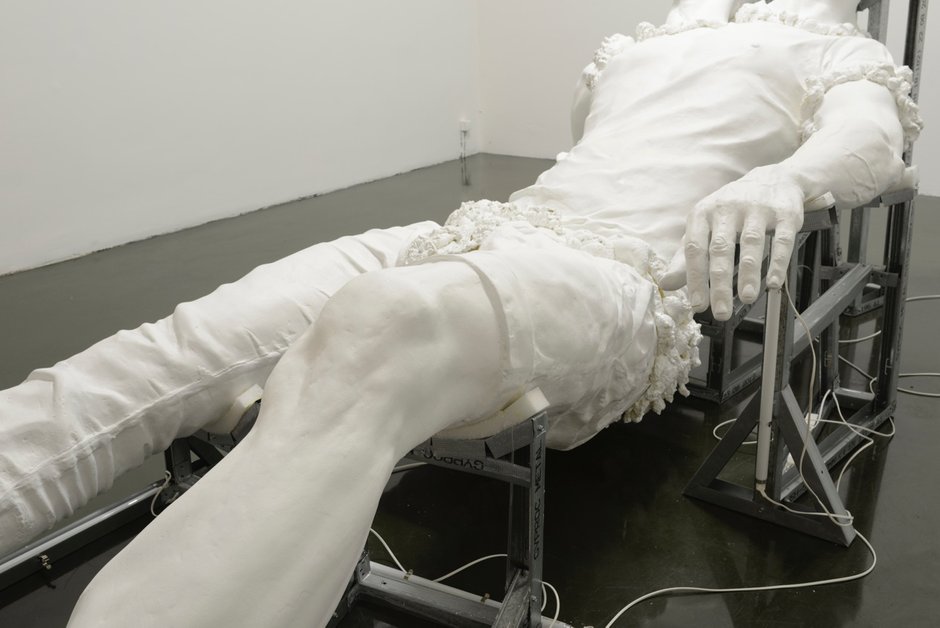 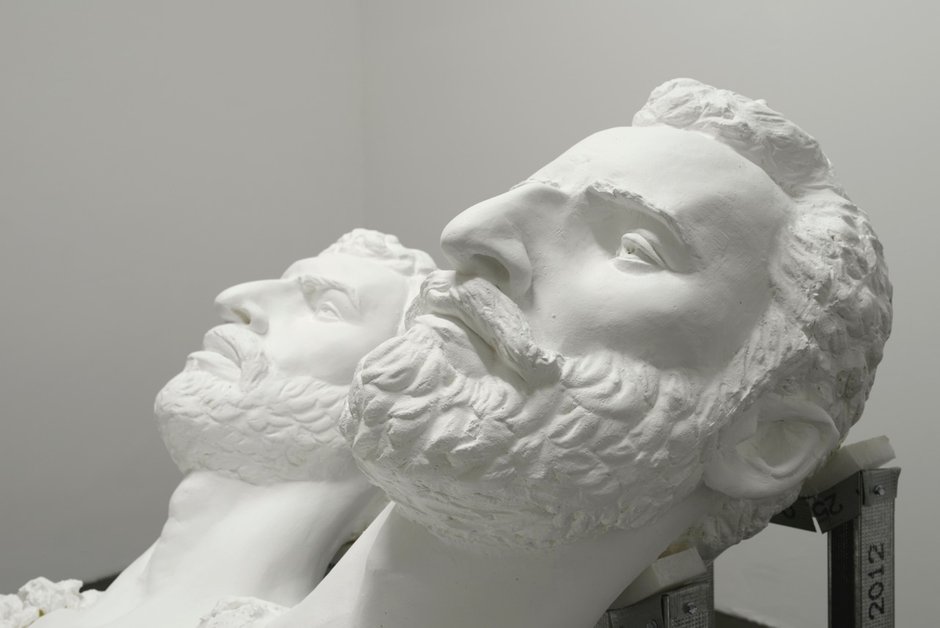 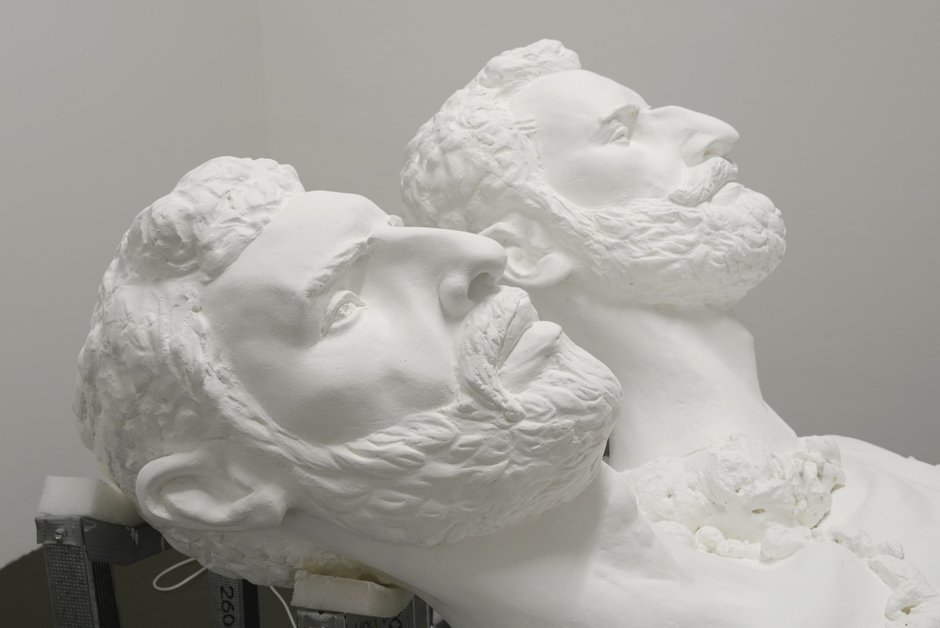 Galerie Marion de Cannière is proud to organize Eleven Thousandth of a Second Long Ride, the fifth solo project of Cristian Bors & Marius Ritiu. The exhibition is a complex association of paintings, sculptures and objects related to travel. The title of the exhibition refers to the 27 km journey of particles in one 11000th of a second in the Large Hadron Collider (LHC) built by the European Organization for Nuclear Research (CERN) in Switzerland. The LHC is the world's largest and highest-energy particle accelerator which recently enabled scientists to prove the existence of the theorized Higgs boson.

In the first room a sculptural element is on display in its crate, both created for the Cutlog Art Fair in New York in 2013. The octagonal composition of the image is based on the geometrical structure of a section of the European particle accelerator. Each compartment is filled with photographs self-portraits taken by Cristian Bors and Marius Ritiu in a Belgian greenhouse. Like bats, they hang upside down on the greenhouse's metal structure - a reference to vampires they are frequently associated with because of their Romanian origin. Cristian Bors & Marius Ritiu also assimilate themselves in this work to the two 'god-particles' described by scientists in order to find elements about the creation of our universe. The distortion of the images due to the perspective effect accentuates the idea of particles moving at the speed of light and colliding to give birth to new elements.

A huge installation is presented in the main room of the exhibition. A two-headed plaster sculpture is supported by a metal construction. Its geometrical shapes are accentuated by fluorescent lamps. The plaster sculpture is composed of the various casts of Bors & Ritiu's monumental sculpture The Patron of the Travellers, a 4m high double self-portrait evoking Mercurius, the antic Roman god of the travellers. All the parts are attached to each other by polyurethane foam, which gives the feeling that the visitor is assisting to the last moments before Bors & Ritiu's bodies will definitively fuse having travelled in space and time through the Large Hadron Collider. The whole installation is related to Cristian Bors' initial training as an engineer and can be seen as an attempt to realign past, present and future in the same way as scientists currently try to observe and explain the very first moments of the birth of our universe.

The prints glued on the wall of the corridor that connects the two exhibition spaces comment on the relationship between macro and micro scale and the possibilities to travel from one to the other. The images have diverse origins. Some are explaining schemes about travel in time and space, found in books or on the Internet. Others are photographic experiments realized by Bors & Ritiu using their smartphones, on which all kind of visual phenomena are registered. The abstract compositions of most of these pictures do not allow the viewer to determine with certitude the nature and the scale of the photographed objects.

Bors & Ritiu's various self-portraits on foam reinforce the impression of a hybrid universe. To create them, they invented a new and original printing technique using polyurethane. The visible image is a reversed image of the original printed picture glued on the foam: a simple intervention corrupting reality and putting into perspective how our consciousness can be guided by scientific or religious knowledge. In a time where the genius of the individual is commonly highly praised by the media, Bors & Ritiu reconsider the notion of collaboration in an original and unexpected way.